Starting this week, Target sells the Google AIY kits, both the Voice and Vision variants. These are upgrades of the kits that came out last year, each now using the Raspberry Pi Zero and coming in new retail packaging. Other than that, they retain their assemble-it-yourself cardboard housing and ability to be expanded upon by intrepid makers (although the Voice kit drops some of its output pins by moving from the RPi Model B to the Zero).

The Voice kit lets you build your own Echo/Google Home-style device, interfacing with the Google cloud to answer questions and respond to requests. Meanwhile, the Vision kit, powered by an Intel Movidius-equipped expansion Hat, will identify objects in its camera’s view. It does all its processing on-board.

Long reserved for advanced academics, R&D labs, and supposed secretive government initiatives, AI has grown in accessibility over the past few years, thanks to hardware initiatives from Raspberry Pi, Nvidia, and others, as well as open source software like Google’s TensorFlow. Putting these easy, fun AIY kits onto the shelves of Target stores in every community makes it many steps easier to launch the career of the next machine-learning superstar.

“By working with Target we’re able to massively expand our retail to reach makers and STEM students in the US,” AIY project lead Billy Rutledge tells Make: via email. “As the maker community continues to grow and innovate, having maker products generally available at Target Stores allows more to have access to not just AIY, but other great kits to learn and experiment.”

The new version of the kits now include the Pi Zero and SD card, with a corresponding increase in price ($49 for the Voice Kit, $89 for the Vision Kit). “Based on consumer feedback, we’ve bundled the Raspberry Pi components inside the kits (previously sold separately),” Rutledge says. “So the total cost has always been the amount you see now if you add in the RPi components and SD card.”

Other retail outlets are being explored as well. And for the AIY lineup expanding, Rutledge hints, “Much more to come, we’re just getting started.” 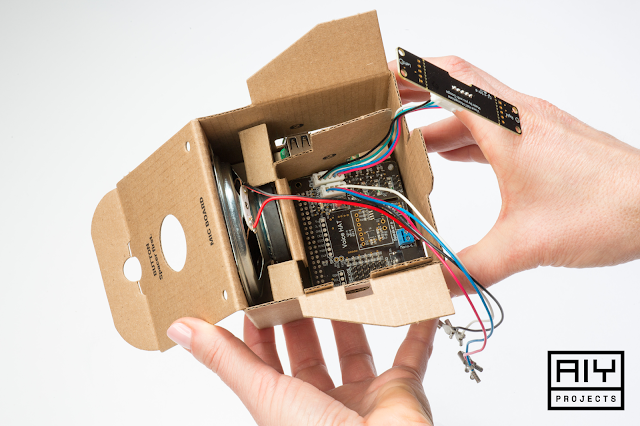