Step 1: If possible get out into nature where you can feel the natural pace of the earth and not the hyperactive and inhumane pace of modern life.

Step 2: Write down the question “What would I do if I only had a week left to live?” and take 10 minutes to write down your answer.

Step 3: Write down the question, “What would I do if I only had a month left to live?” and take 10 minutes to write down your answer.

Step 4: Write down the question, “What would I do if I only had a year left to live?” and take 10 minutes to write down your answer.

Step 5: Write down the question, “What would I do if I only had five years left to live?” and take 10 minutes to write down your answer.

Step 6: Write down the question, “What would I do if I only had a life left to live?” and take 10 minutes to write down your answer.

Step 7: Finally, take 10 minutes to reread all of your answers while asking yourself, “How can I design my routine this week to more closely align with these answers?”

I was reading the following article earlier today and wondered if just like families I might find a cargo bike in my future.  Head over to read the article on the NYTimes, see some of it below. 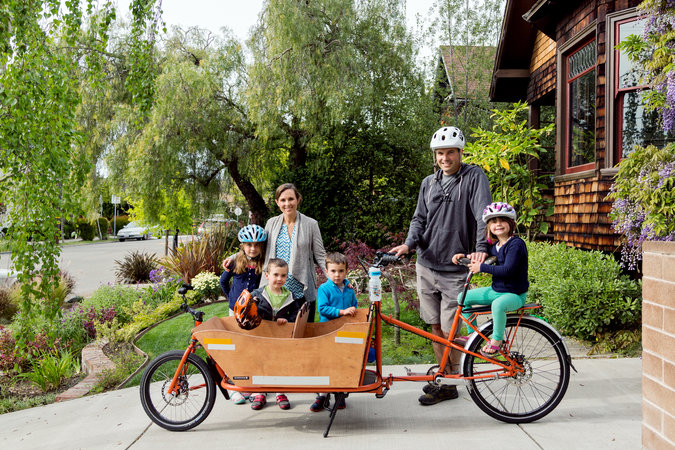 Dave Hoverman and his wife, Abby Smith, in Berkeley, Calif., with their cargo bike, which can hold all four children.CreditJason Henry for The New York Times

When Dave Hoverman, 38, a business strategy consultant in Berkeley, Calif., goes to Costco on the weekends, he ditches his Audi Q7 and instead loads his four children into a Cetma cargo bike with a trailer hitched to the rear.

“We do all sorts of errands on the bike,” Mr. Hoverman said. “We try not to get in the car all weekend.”

Mr. Hoverman is among a growing contingent of eco-minded and health-conscious urban parents who are leaving their car keys at home and relying on high-capacity cargo bikes for family transportation.

Cargo bikes initially catered to the “hard-core D.I.Y. crowd — people who wanted to carry around really large objects like surfboards or big speakers or kayaks,” said Evan Lovett-Harris, the marketing director for Xtracycle, a company in Oakland, Calif., that introduced its first family-oriented cargo model, the EdgeRunner, in 2012. Cargo bikes, he said, now account for the largest proportion of the company’s sales.

“When we first started selling these bikes 15 years ago, we were the total freako weirdos,” said Ross Evans, the company’s founder. “Back then, a basket on your handlebars was considered fringe.”

These days, cargo bikes are no longer a novelty: They are cropping up not just in the expected West Coast enclaves like Seattle, Portland and the Bay Area, but in cities like New Haven, Tucson and Dallas. “It used to be that if I saw somebody in Boston on a cargo bike, I probably knew them and probably helped them buy their bicycle,” said Nathan Vierling-Claassen, who has ridden a cargo bike since 2008. “Now that’s no longer the case.”

Cargo bikes are also popular in Washington. Jon Renaut, 37, a software engineer at the Department of Homeland Security, said that he is one of more than a dozen parents at his children’s elementary school who commute to school and work by cargo bike. “There have been only two days this whole school year — when it was really, really snowy out — that we left the bike at home,” Mr. Renaut said. What helps keep his 4- and 6-year-old daughters warm, he said, is to have them face backward while riding.

The popularity of cargo bikes has given rise to more variety. Cargo bikes come in two main types: longtails, which look like a regular bike with a large rack extended over the rear wheel, and the Dutch-style bakfiets, which has a cargo box mounted in front of the handlebars. While longtails are considerably cheaper (a Yuba Mundo starts at $1,300), bakfiets (which start at about $3,000) can generally hold more.

“The thing I love about cargo bikes these days is that there is such an amazing selection,” said Shane MacRhodes, 43, who manages a school transportation program in Eugene, Ore. “People are finding bikes that really fit their lifestyle. Some people like the sturdiness of a Yuba Mundo, and some people like the sporty zippy ones. It’s almost like the S.U.V. versus the sports wagon.”

60 years ago, incredible amounts of people in the U.S. were given the opportunity to live in their own house, outside of traditional centers of populations (cities). A significant complication to this new lifestyle slowly developed, as markets produced more to meet consumer needs. Not only did most living a quiet suburban lifestyle start to buy more items individually, but they bought nearly identical things for their own households — which could be easily shared with a few neighbors. This phenomenon has spread to nearly all ways of living, as dominant culture has come to dictate product consumption as the remedy for social ills.

A highly consumptive lifestyle, focused around maintaining and accumulating stuff, requires much more time and effort to uphold: nearly 66 hours are spent each week by the average person living in the U.S.

Many people find different paths toward happiness, including valuing materialistic practices. A challenging view is Minimalism, which proposes that happiness and healthful living can be found through reducing the amount of possessions one owns/uses. Some make the case that the sentimental value attached to certain ‘stuff’ can be related to experiences and other ways of perceiving one’s surroundings, and are not tethered to the things themselves.

Minimalism may not be a sustainable model for the current world of international trade and finance, but at its core this philosophy can change/challenge a person’s outlook on what’s actually necessary in order to live in a fulfilling fashion.

I was reading The Ticktock of the Death Clock on the NYTimes and I found the piece compelling. 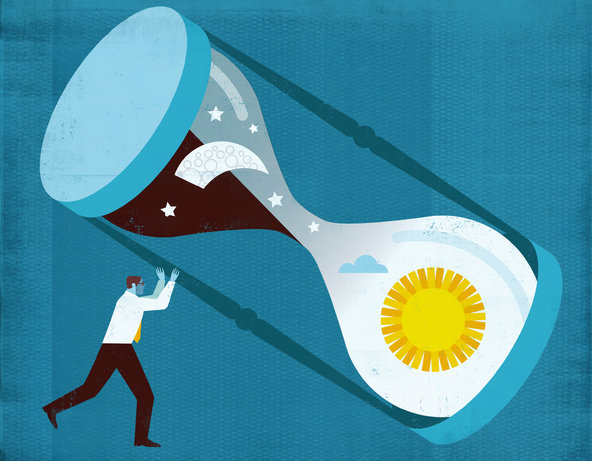 With every new silver hair sprouting from my scalp, I can’t help but think of the shortening arc ahead of me. Now in my mid-50s, for the first time I’m no longer looking up, over and beyond. Rather, my trajectory points downward at the approaching horizon. In this frame of mind, I recently found myself at DeathClock.com, the “Internet’s friendly” — if not scientific — “reminder that life is slipping away … second by second.” After I completed the short questionnaire, the Death Clock’s algorithm quickly did the math, concluding: “Your personal day of death is Wednesday, April 23, 2031.”

Old enough not to believe everything I read on the Web, I queried my doctor about my expected longevity. He quickly e-mailed back: “All things being equal, I believe your estimated survival time would be around 72 to 75. Good luck.”

Good luck? I spent a few moments processing the possible meanings behind “good luck” (none of them particularly appealing), realizing my good doctor had pretty much corroborated the Death Clock’s calculation, then sat there feeling sorry for myself, imagining the hourglass emptying. Then, not allowing myself to wallow one grain of sand longer, I decided to quit my day job.

Yes, just like that. Call me crazy. I worked as an editor and, ironically, my soon-to-be-former boss had once given me a copy of Malcolm Gladwell’s“Blink: The Power of Thinking Without Thinking,” suggesting I needed to act more on impulse than rationality. I had previously underlined this particular section: “Decisions made very quickly can be every bit as good as decisions made cautiously and deliberately.”

I’d long been toying with — even planning for — the day I’d quit. But so many fears had stood in my way, starting with the most basic: dollars and cents. Yes, my partner and I had downsized. Yes, I’d been squirreling away a rainy-day fund. And yes — and most significantly — I’d been talking regularly with my therapist not just about quitting, but about how to live a truly meaningful life. I knew it wasn’t sleeping my way through the workdays to get to the weekend.

Now a new fear – the ticktock of the clock — squashed the pecuniary one, and the decision to leave my job seemed like a Gladwell no-brainer.

Anyway, my plan wasn’t to spend the rest of my life traveling the world. First of all, that rainy-day fund isn’t that big. And as short as 18 years sounds, that’s a heck of a lot of days and weeks (and yes, seconds) not to fritter away. Rather, my plan was to do what I’d been doing in bits and pieces, in between jobs, on vacations, before the work day and after hours: Be a full-time writer.

Fortunately, I had some role models in making this leap. My friend Peter, 53, a documentarian, had left his full-time job 18 months earlier to take what he then called a sabbatical to write a play. He explained to me: “I realized it was a myth to think there would be a time when I don’t have any financial worries. If not now, when?” He then added that his 52-year-old best friend who died of a malignant brain tumor “was a very real accelerator of my decision.”

Similarly, my friend Tom, 56, told me over coffee he’d come to the realization, “I only have so many years left.” A photographer and writer, he’d recently stepped down from a university directorship after watching two of his closest friends die, “guys that I thought were bulletproof,” he explained. “I want to quit talking about doing my own work – and do my own work.”

The week after getting my doctor’s “good luck” e-mail, I gave notice. I told a good story but what I didn’t say was this: “I’ve got only one life to live, and if I don’t do it now, when?”

I couldn’t sleep the next few nights, the loud echoes of my naysayers circling through my head. But over the weeks that followed, things began to shift. I started to get new assignments and finished up a book proposal. I’d get up at 5 a.m. as excited as a kid on Christmas morning. I felt a new sense of ownership, joy and meaning to my days. This wasn’t my work, it was my life. And I didn’t just like it – I loved it.

Of course, I know I won’t spend the rest of my days in this state of euphoria. I will struggle with blank pages and intermittent paychecks. But I will appreciate each day more. I understand now what my friend Tom was telling me when he sent me a short passage from Wendell Berry’s novel “Jayber Crow,” in which the namesake main character reflects on the passage of time. “Back at the beginning, as I see now, my life was all time and almost no memory … And now, nearing the end, I see that my life is almost entirely memory and very little time.”

I know too well the feeling that my life is now more memory than future. As I finish these pages, I see that my clock is down two million seconds from when I started. Call me crazy, but I have to say I love the ticktock of the Death Clock. Without it, I might not be living.