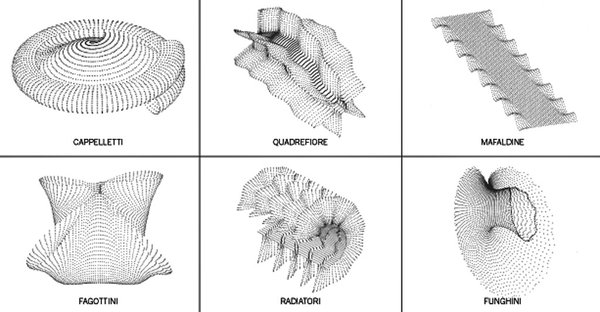 Reposted from the NYTimes where you can read the full article and see the Multimedia show and related links.  Well worth it. 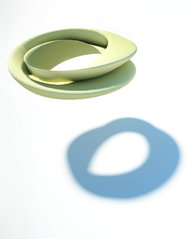 Sander Huisman did, too — and then he wondered about what mathematical equation would describe the undulating shapes he was eating.

Mr. Huisman, a graduate student in physics at the University of Twente in the Netherlands, spends much of his days using Mathematica, a piece of software that solves complicated math problems and generates pretty pictures of the solutions.

“I play around with Mathematica a lot,” he said. “We were eating pasta, and I was wondering how easy these shapes would be recreated” with the software.

So that evening after dinner, Mr. Huisman figured out the five lines or so of Mathematica computer code that would generate the shape of the pasta he had been eating — gemelli, a helixlike twist — and a dozen others. “Most shapes are very easy to create indeed,” he said.

He posted one of them to his blog, thinking he would do a sort of mathematical-pasta-of-the-month for the next year. But he then forgot about them until someone asked for the recipes of the other pasta shapes, and he posted those to his blog, too.

Mr. Huisman, who studies fluid dynamics, is not the only who has been mathematically inspired by pasta. Several years ago, Christopher Tiee, then a teaching assistant for a vector calculus class at the University of California, San Diego, included in his notes a pop quiz asking students to match pasta shapes with the equations.

“We were interested in, if you like, the amalgamation of mathematics and cooking tips — the profane, the sacred,” Mr. Legendre said. “I was actually speaking to someone in Paris last week who said, ‘This might have been a project by Dali.’ ”

The book classifies 92 types of pasta, organizing them into an evolutionlike family tree. For each, the book provides a mathematical equation, a mouthwatering picture and a paragraph of suggestions, like sauces to eat it with.

Mr. Legendre calls trenne, a pasta with the rigid angles of triangular tubes, a freak. “It’s a mirror universe where everything is pliant and groovy, and in that universe there’s someone that stands out, and it’s the boring-looking trenne with its sharp edges,” he said.

Mr. Legendre has even designed a new shape — ioli, named for his baby daughter — which looks like a spiral wrapped around itself, a tubelike Möbius strip.

“I thought it might be nice to have a pasta named after her,” he said.

He is looking to get about 100 pounds of pasta ioli manufactured, but that is still probably months away, because of the challenges of connecting the ends together.