Skip to content
Clean inbox, simplified life, 10% solution, all of these are simply one-touch moves taught best is soccer, the team game.  If you are looking to make your team successful, do you need the “guru” or are you trying for a shortcut that education can provide.  Take a look as Barcelona provide a model that all clubs should strive to copy 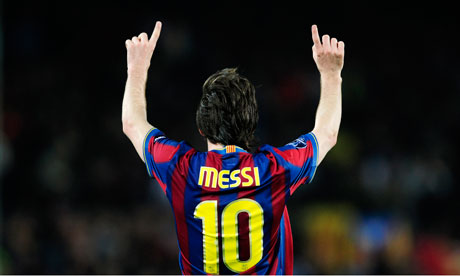 In Spain’s 1-0 win over Colombia at the Santiago Bernabéu stadium on Wednesday an unwelcome truth engulfed the locals. To the rest of football it has long been obvious that Barcelona are taking over the world. But nobody expected them to take over Real Madrid.

As a second-gear display knocked aside Spain’s South American guests, a familiar realisation deepened. The Real players in Vicente del Bosque’s World Cup and European Championship winning side were trying to play like their Barcelona colleagues, obediently copying the patterns and angles of the team who are running away from them in the La Liga title race.

Just before half-time Gerard Piqué, a model of elegance for club and country at centre-back, burst out of a defensive position and chipped the ball over a Colombian head for Andrés Iniesta, who jumped, extended a boot and killed its motion with his toe, bringing it back to earth with the gentleness of a boy taking a bird’s egg from a nest. A loud clatter of applause ran round the Bernabéu, where the crowd were mostly Madrileños, and where cheering Barça players is only marginally more appealing than self-immolation.

It takes a powerful force to impose anything on Real Madrid, that fortress of imperious royalism, but even José Mourinho, Cristiano Ronaldo and the heritage of nine European Cup triumphs are currently helpless in the face of Barcelona’s tiki-taka brilliance. Last week, Pep Guardiola’s men struck at Real’s soul, surpassing the league record of 15 consecutive wins set by the Madrid team of Di Stefano and Puskas in 1960-61. The run came to an end in Gijón last night, where Barcelona were held 1-1, but no cherished landmark is safe from them.

So it falls to Arsenal, often teased as Barcelona-lite, to find a formula that eludes even Mourinho these days. Wednesday’s Champions League first-leg tie in London pits the pass masters against the apprentices, with potentially painful consequences for the Gunners. Last season Mourinho’s Inter broke up Barça’s scintillating rhythms but in this year’s first Clásico that feat was beyond him.

“Inter made a defensive block around their own penalty area and then counterattacked really, really quickly,” says Fabio Capello, the England coach. “But Real Madrid tried to press Barcelona all over the pitch. Their mentality is to go out and fight Barcelona. But Barça just played through the gaps because they are good enough to do that.” Result: Barcelona 5, Real Madrid 0, and a gaping hole in the idea that a side who averaged 70% possession in this term’s Champions League group stage can, with tactical forethought, be stopped.

As the Arsenal game approaches, Barcelona are hypnotising their trade.

Spain’s World Cup winning side contained seven Camp Nou regulars: Carles Puyol, Piqué, Sergio Busquets, Xavi, Iniesta, Pedro and David Villa (who was on his way from Valencia). Against Colombia, Puyol’s absence (he will also miss his club’s trip to Arsenal) reduced the Barcelona quota to six but the front four were still there: Xavi, Pedro, Iniesta and Villa. If Messi were Spanish, white flags would rise across the international game.

Back at the club, Guardiola has agreed a new contract until 2012 and June is the completion date for a €9m (£7.6m) expansion at La Masia, the training centre/university where the club’s aesthetic manifesto is drilled into students. Iniesta, Xavi, Piqué, Busquets and Messi are all graduates. On Messi’s home continent, meanwhile, Barcelona are linked with the 19-year-old Neymar, the latest Brazilian prospect. Alberto Valentin, the club’s chief scout, says: “I can say he fits the profile of a Barcelona player, but that is all I can say.”

The conquistadors drive on. Last weekend Messi scored his ninth hat-trick for the club to raise his haul for the season in all competitions to 37 in 31 outings. Sandro Rosell, the club president, bragged: “We have the best player in the world in the best team in the world.”

Messi looks a certainty to shred last year’s personal record of 47 goals in 53 matches. He is on 24 goals in La Liga and, with 15 games left, is odds-on to smash the record of 38 in a campaign.

During those 16 consecutive wins Barcelona scored 60 times and conceded six. Guardiola says of Messi: “We wouldn’t be who we are now without him. We’d still be a good team, but this guy is at a different level. All history’s great teams have had a special player and that’s what Messi is for us. We are very lucky to have him here when he’s still only 23. But Leo also knows that without the rest of the team, he couldn’t be what he is now.”

“Fútbol Club Barcelona is a private and non-profit making sports Catalan Association of natural persons, with its own legal status, constituted on November 29 of the year 1899.” So says the Barça charter, in the English version, which leaves one problem. If only “natural persons” are allowed, where does that leave Messi, the super-flea, or “one-man PlayStation”, as Zlatan Ibrahimovic calls him?

FCB also have statutes, delegates, “Federal Assemblies”, an elected president and a chapel in the tunnel just before the players jog on to the pitch. This facility is doubtless used more by the opposition than the home team.

The Barcelona model is the diametric opposite of the Premier League’s highly corporate system of leveraged buyouts and tycoon ownership. But the question remains: if the real secret is on the pitch – if the magic is in the football itself – why does every aspiring club in Europe not hire a spy satellite and film La Masia from space with the aim of plagiarising its every move?

As Xavi told Sid Lowe in an interview for the Guardian three days ago: “Most of our players are from Catalonia and have been here a long time. Education. Players have had 10 or 12 years here, that’s the difference. When you arrive at Barcelona the first thing they teach you is: think. Think, think, think quickly. [Doing the actions] Lift your head up, move your head, see, think. Look before you get the ball. If you’re getting this pass, look to see if that guy is free. Pum. First time.

“Look at Busquets. He is the best central midfielder there is playing one-touch. Watch him, you’ll see that he doesn’t need more. He’s controlled, looked and passed in one touch. Some players need two or three touches and these days, given how physically demanding football is and how fast players are, that’s too much. That’s slow. Look at us: [Dani] Alves, one touch. Iniesta, one touch. Messi, one touch. Piqué, one touch. Busi [Busquets], me, seven or eight players with one touch. Fast.”

The result: complete mastery of the ball. Barcelona’s 70%-plus possession in the Champions League eclipses Arsenal’s 57%, which itself is hardly shabby. Their pass accuracy is 84%, Arsenal’s 75%. In El Clásico, Guardiola’s men completed more than 600 passes. Real failed to reach 300.

These maths are not conjured overnight from a desire to impose a bohemian manifesto on the sport. They are the product of 20 years of relentless teaching, of ideology, stretching back to Johan Cruyff and the Dutchification of Barcelona in the early 1990s. Total football has achieved its annexation not on the flatlands of Holland but on the Mediterranean landscape of Catalonia.

This stunning and game-enriching victory over sterility is not only a Hollywood weepie about education and the power of teaching to inspire. It requires money, too. Barcelona (turnover of €398.1m) are second only to Real Madrid (€438.6m) in the European rich list and are capable of spectacular splurges in the transfer market to supplement the work of La Masia.

The average height of Barça’s swarming front five is 5ft 7in. Xavi told Lowe: “Six years ago I was extinct as a player; footballers like me were in danger of dying out. It was two metres tall, powerful, in the middle, knock-downs, second balls, rebounds. But now I see Arsenal and Villarreal and they play like we do. I’m a romantic. I like that. I like the fact that talent, technical ability, is now valued above [purely] physical conditions.”

With so many diminutive wreckers flashing about, Guardiola uses Busquets and Piqué to provide height at corners and set pieces. Here we see another strength of the first-team set-up. Each talent has its counter-weight. The sublime link play of Xavi is complemented by Iniesta’s quicker feet, his ability to accelerate the play, shuffle his way through tight spots and dispatch a killer ball too quickly for defenders to anticipate.

In defence Puyol’s gift for negation is frantic, impassioned, English. Alongside him Piqué strokes the ball around like an attacking midfielder who has merely dropped back through the team to see what all the fuss is about. “Piquénbauer”, as Catalans call him, after Franz Beckenbauer, is the most composed centre-back of his generation: the defender Rio Ferdinand had been for a while, in his prime.

Then the scouting notes go stratospheric with Messi, of whom Roberto Baggio says: “He plays like a child in a playground, unaffected by tactics, team-mates or opponents.”

In the Barcelona cosmos, Messi sits above the religion of mere endless passing and possession. He is the flourish at the end of it: the beautiful kill.