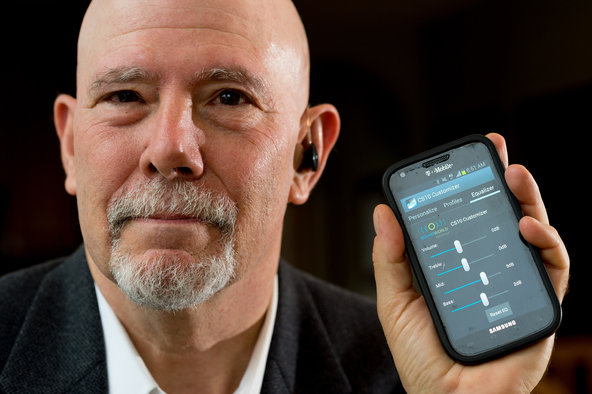 These are interesting, from the NYTimes

“My wife has been bugging me for several years to do something about my hearing,” said Mr. Faust. “I spent part of the summer of 1969 at Woodstock. So that probably didn’t help.”

Instead of going the traditional route — buying hearing aids through an audiologist or licensed hearing aid dispenser — Mr. Faust purchased a device that is classified as a personal sound amplifier product, or P.S.A.P., which is designed to amplify sounds in a recreational environment.

Unlike hearing aids, P.S.A.P.’s are exempt from Food and Drug Administration oversight and can be sold as electronic devices directly to consumers, with no need to see a physician before buying one. They come with a range of features and vary widely in price.

And while some hearing professionals have long cautioned against the devices, citing their unreliability and poor quality, many also say that a new generation of P.S.A.P.s that utilize the latest wireless technology are offering promising alternatives for some people with hearing loss.

The device Mr. Faust bought, the CS10 from a Chicago-based company called Sound World Solutions, cost $299.99, thousands of dollars cheaper than most digital hearing aids. While it has many of the same features that high-end hearing aids have, including 16 channels to process sound, directional microphones, feedback insulation and noise reduction, it has one capability that hearing aids and other devices on the market currently don’t have. It comes with software that enables consumers to program it themselves, a feature made possible in part by the adoption of the widely available Bluetooth wireless technology, rather than the proprietary platforms used by most wireless hearing aids.

Rather than having to visit an audiologist to program the device, something that hearing aid users must do, CS10 customers can program it themselves by downloading the app to an Android phone or a computer (an iPhone version is under development). After opening the software, users respond to a series of beeps and tones of varying volumes by clicking a button to indicate whether they have heard the sound. This self-programming feature may make the CS10 especially useful for consumers in developing countries, where Sound World intends to distribute them, and where there is no formal distributional model for hearing aids and “no audiologists,” said Stavros Basseas, the company’s co-founder.

There are limitations to who can benefit. “A personal sound amplifier is really designed for patients who have normal or near normal hearing. It’s not really designed as a hearing device to address significant sensorineural hearing loss,” said Bettie Borton, the president of the American Academy of Audiology. It is also important that those with hearing loss be screened for potentially serious medical problems that may be causing the problem.

Still, despite these concerns, the CS10, which looks and behaves like a cross between a Bluetooth headset and a hearing aid, may be a road map for hearing aids in the near future. Most hearing aids with wireless capabilities currently use either a proprietary wireless platform or Bluetooth’s “Classic” technology, an older, more power-hungry version of Bluetooth, and require an intermediary remote-control-like device or a body-worn device to connect the hearing aid to cellphones, televisions or Bluetooth-capable speakers. In addition to being inconvenient, these external devices are also costly, ranging from $150 to $500. In contrast, the CS10 requires only one external rechargeable battery that fits behind the ear like a traditional hearing aid. The concept is catching on: Dr. Rodney Perkins, an otologist who founded the California Ear Institute at Stanford University, plans to release a similar device next year, dubbed Soundhawk.

Ms. Borton said many patients hesitated to buy wireless hearing aids with intermediary devices. “Several of them told me, ‘I’m going to wait and when you have a product where I don’t have to wear the streaming device, then I’ll be back.’”

Not surprisingly, hearing aid companies are investigating more efficient, less power-hungry forms of Bluetooth technology such as Bluetooth Smart — currently used by gadgets like Fitbit and Nike Fuelband — that would enable their products to skip the intermediary device. Suke Jawanda, chief marketing officer of the Bluetooth Special Interest Group, said that several major hearing aid companies have become members in the last year.

One of the roadblocks to developing hearing instruments that connect seamlessly with all mobile devices has been the lack of a standard protocol for wireless connection. “It is important that we can serve all smartphones, and not only a small subset,” said Stefan Launer, vice president of science and technology at Phonak, a major hearing aid manufacturer. “In order to achieve that, a standard has to be defined and implemented by everyone involved. When this will be the case is hard to predict.”

The technology may bring new functionality to the next generation of hearing aids. As with the CS10, Bluetooth-enabled hearing aids could theoretically route Skype computer calls directly to the aid, and users could link directly to their Bluetooth-enabled smart TVs or digital stereos, listening at the volume of their choice, without drowning out their non-hearing-impaired neighbors.

Manufacturers of hearing devices are making progress. Recently GN ReSound revealed its “Made for iPhone” hearing aid, theReSound LiNX, at the Consumer Electronics Show in Las Vegas; it uses proprietary wireless 2.4 GHz technology and Bluetooth Smart and is expected to be released worldwide in the first quarter of 2014. And rather than a body-worn device, the iPhone itself will serve as the remote, enabling the user to switch between already-programmed “environments” (such as hearing in a restaurant, for instance, or listening to music). With the iPhone’s latest operating system, iOS7, users with two Made for iPhone hearing aids can listen to music on their iPhone in stereo via the Airplay feature or follow turn-by-turn directions in their car. Though the company didn’t announce a price, ReSound’s president, Kim Herman, said that the LiNX will be sold at “a premium” to another ReSound product, the Verso, which starts at $2,900 and sells for as high as $3,500.

And in September, Advanced Bionics, a sibling company of Phonak, released a new sound processor, dubbed the Naida, that allows cochlear implants to connect with devices using Bluetooth technology.

An online hearing retailer, Embrace Hearing, is currently developing a device that would “jailbreak” existing hearing aids that come with Bluetooth Classic technology, said the company’s co-founder, Ross Porter. The device and accompanying app would allow users to adjust program settings on their hearing aids themselves.

There is ongoing debate about whether user-programmable hearing needs will one day replace the need for costly visits to an audiologist. Mr. Porter thought that major hearing aid manufacturers “want to give a little bit more flexibility to the user, but not replace audiologists.”

But Ms. Borton said that even if users could adjust the settings themselves, it wouldn’t be a replacement for a professional custom fit. “A successful hearing aid fitting is not solely putting the device on the patient and patting them on the back and sending them out the door,” she said. “High quality hearing aid fittings by audiologists involve verifications by various electronic measures and validation.”

Perhaps a larger obstacle to the wholehearted adoption of Bluetooth technology in hearing aids, though, is the patients themselves: the average age of a hearing aid user is 71.

“I would say probably 80 percent of my caseload, even if they had Bluetooth programming technology available to them, are not, perhaps because of their age demographic, capable of embracing that kind of technology easily. They don’t own computers, they are not online,” said Ms. Borton.

As an IT networking consultant who is comfortable working with new technology, Mr. Faust is an exception to that rule. He is happy to use the CS10 to make calls and looks forward to the next iteration of the device, when the device is able to stream music directly from his phone. But for now, Mr. Faust likes being able to program the CS10 himself. “I can really turn it up and I can hear things that other people can’t hear,” he said. “With the adjustability this easy — it’s almost like ‘more than’ a hearing aid.”