It is August and the doldrums as far as Engineering and Consulting practices are concerned and that is GREAT.  There is time to take on all the more serious projects that I am too busy with at other times.

I setup my new-to-me 3D printer: 3Dsystems Cube 3 and tested it by printing a new key cap for my keyboard.

I received a Bean Box from Seattle Roasters and I needed to improve the pour from the machine on the left which doesn’t have the same pressure mechanism as the old Capresso on the right (which is used at work). 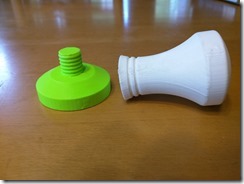 What I lacked was a really good espresso tamper, so I printed this one , it turned out great!

Now I have the rest of the week while I work in the woodshop to complete a thorough A/B test.  So far, the tamper has made a significant improvement regardless of the grinder.

Pretty snazzy and useful for a second object print. 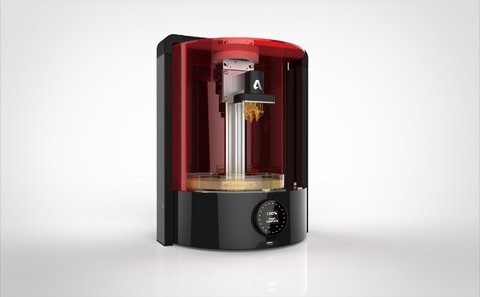 Read the full article at http://www.bbc.co.uk/news/technology-16907104 for the related links, articles and comments.

A 3D printer-created lower jaw has been fitted to an 83-year-old woman’s face in what doctors say is the first operation of its kind. The transplant was carried out in June in the Netherlands, but is only now being publicised. The implant was made out of titanium powder – heated and fused together by a laser, one layer at a time. Technicians say the operation’s success paves the way for the use of more 3D-printed patient-specific parts.

The surgery follows research carried out at the Biomedical Research Institute at Hasselt University in Belgium, and the implant was built by LayerWise – a specialised metal-parts manufacturer based in the same country.

The patient involved had developed a chronic bone infection. Doctors believed reconstructive surgery would have been risky because of her age and so opted for the new technology. The implant is a complex part – involving articulated joints, cavities to promote muscle attachment and grooves to direct the regrowth of nerves and veins. However, once designed, it only took a few hours to print. 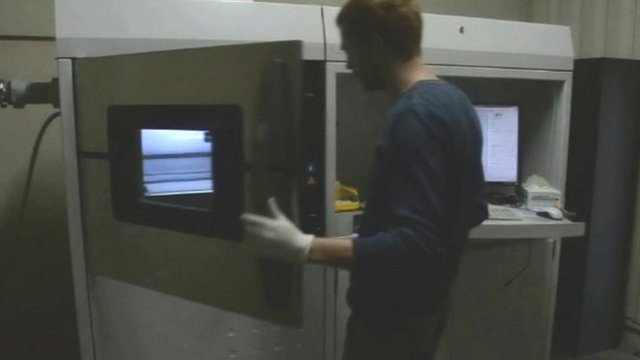 "Once we received the 3D digital design, the part was split up automatically into 2D layers and then we sent those cross sections to the printing machine," Ruben Wauthle, LayerWise’s medical applications engineer, told the BBC.

"It used a laser beam to melt successive thin layers of titanium powder together to build the part.

"This was repeated with each cross section melted to the previous layer. It took 33 layers to build 1mm of height, so you can imagine there were many thousand layers necessary to build this jawbone."

Once completed, the part was given a bioceramic coating. The team said the operation to attach it to the woman’s face took four hours, a fifth of the time required for traditional reconstructive surgery.

"Shortly after waking up from the anaesthetics the patient spoke a few words, and the day after the patient was able to swallow again," said Dr Jules Poukens from Hasselt University, who led the surgical team.

The surgery time decreases because the implants perfectly fit the patients”

"The new treatment is a world premiere because it concerns the first patient-specific implant in replacement of the entire lower jaw."  The woman was able to go home after four days. Her new jaw weighs 107g, just over a third heavier than before, but the doctors said that she should find it easy to get used to the extra weight. Follow-up surgery is scheduled later this month when the team will remove healing implants inserted into holes built into the implant’s surface. A specially made dental bridge will then be attached to the part, following which false teeth will be screwed into the holes to provide a set of dentures.

The team said that it expected similar techniques to become more common over the coming years. "The advantages are that the surgery time decreases because the implants perfectly fit the patients and hospitalisation time also lowers – all reducing medical costs," said Mr Wauthle. 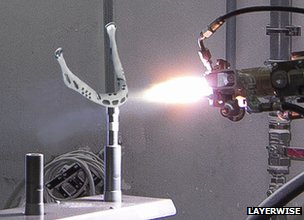 "You can build parts that you can’t create using any other technique. For example you can print porous titanium structures which allow bone in-growth and allow a better fixation of the implant, giving it a longer lifetime."

The research follows a separate project at Washington State University last year in which engineers demonstrated how 3D-printer-created ceramic scaffolds could be used to promote the growth of new bone tissue.

They said experiments on animals suggested the technique could be used in humans within the next couple of decades.

LayerWise believes the two projects only hint at the scope of the potential medical uses for 3D printing.

Mr Wauthle said that the ultimate goal was to print body organs ready for transplant, but cautioned that such advances might be beyond their lifetimes.

"There are still big biological and chemical issues to be solved," he said.

"At the moment we use metal powder for printing. To print organic tissue and bone you would need organic material as your ‘ink’. Technically it could be possible – but there is still a long way to go before we’re there."